UK senior health official JO Churchill has said that Pakistan is retained on Britain’s “red list” due to the "worsening Covid-19 situation and low testing rates".

In a letter dated August 6, Churchill while explaining the reason for keeping Pakistan on the red list of countries said the UK’s Joint Biosecurity Centre continues to assess risk based on factors including incidence, trends in deaths/hospitalizations, exported cases as well as testing and test positivity rates.

Her response comes after Pakistan including several members of the British House of Commons slammed the UK government for keeping Pakistan on its red list of countries at the latest coronavirus travel update while removing India from it. 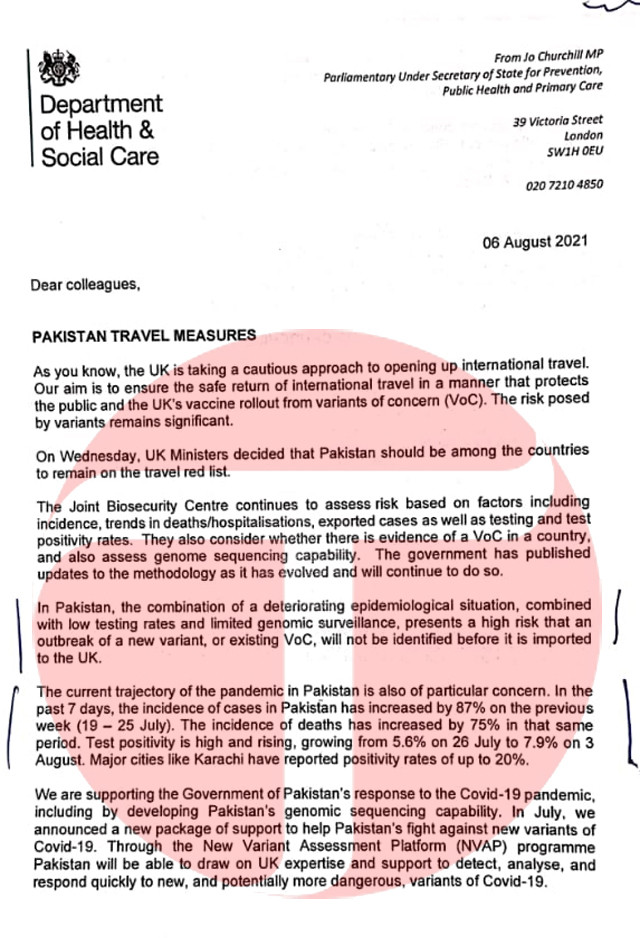 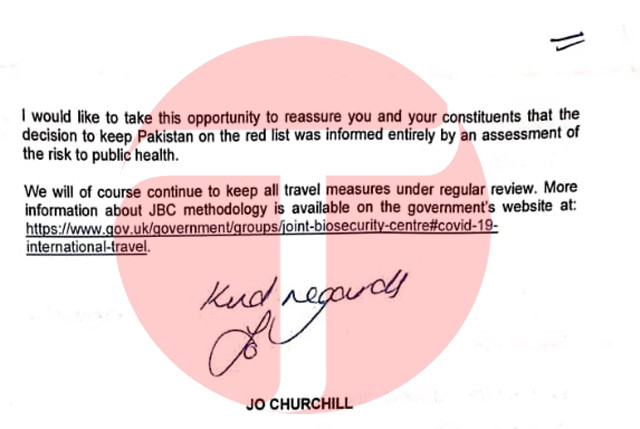 The British government placed Pakistan and India on the red list on April 2 and 19, respectively. However, in an updated list, the government announced that India, Bahrain, Qatar, and the UAE would be moved to the amber list from August 8.

“In Pakistan, the combination of a deteriorating epidemiological situation, combined with low testing rates and limited genomic surveillance, presents a high risk that an outbreak of a new variant, or existing VoC [variant of concern], will not be identified before it is imported to the UK,” she said in a letter.

The UK health official said the current trajectory of the pandemic in Pakistan is also of particular concern. “In the past 7 days, the incidence of cases in Pakistan has increased by 87% on the previous week (19 - 25 July). The incidence of deaths has increased by 75% in that same period. Test positivity is high and rising, growing from 5.6% on 26 July to 7.9% on 3 August,” read the letter.

In major cities like Karachi have reported positivity rates of up to 20%, she added.

The red list of the countries means only the UK nationals and those with residency rights will be allowed to travel to the country if they stayed in Pakistan in the 10 days before they arrive. The amber travel list means that returnees can quarantine at home, rather than in a hotel.

Britain’s MP Yasmin Qureshi termed the move to keep Pakistan on the red list while downgrading India “a clear and blatant discrimination towards Pakistan”.